“I would paint Stas Mikhailov with cognac and chocolate, and Shnur with beer and fish with bones”
Food artist Pavel Bondar told how he sees Russian stars

The artist Pavel Bondar is known, if not by all, then by many. The young man became famous for the fact that he began to draw media personalities with the help of products. For example, US President Donald Trump is bitter as dill, and singer Lady Gaga is sweet as a banana with a light taste of kiwi and pomegranate seeds. But I wonder what kind of products he would use to paint Russian artists? We’ll warn you in advance: only Olga Buzova will be unlucky. As the author says, he has not been interested in portraying this singer for a long time. 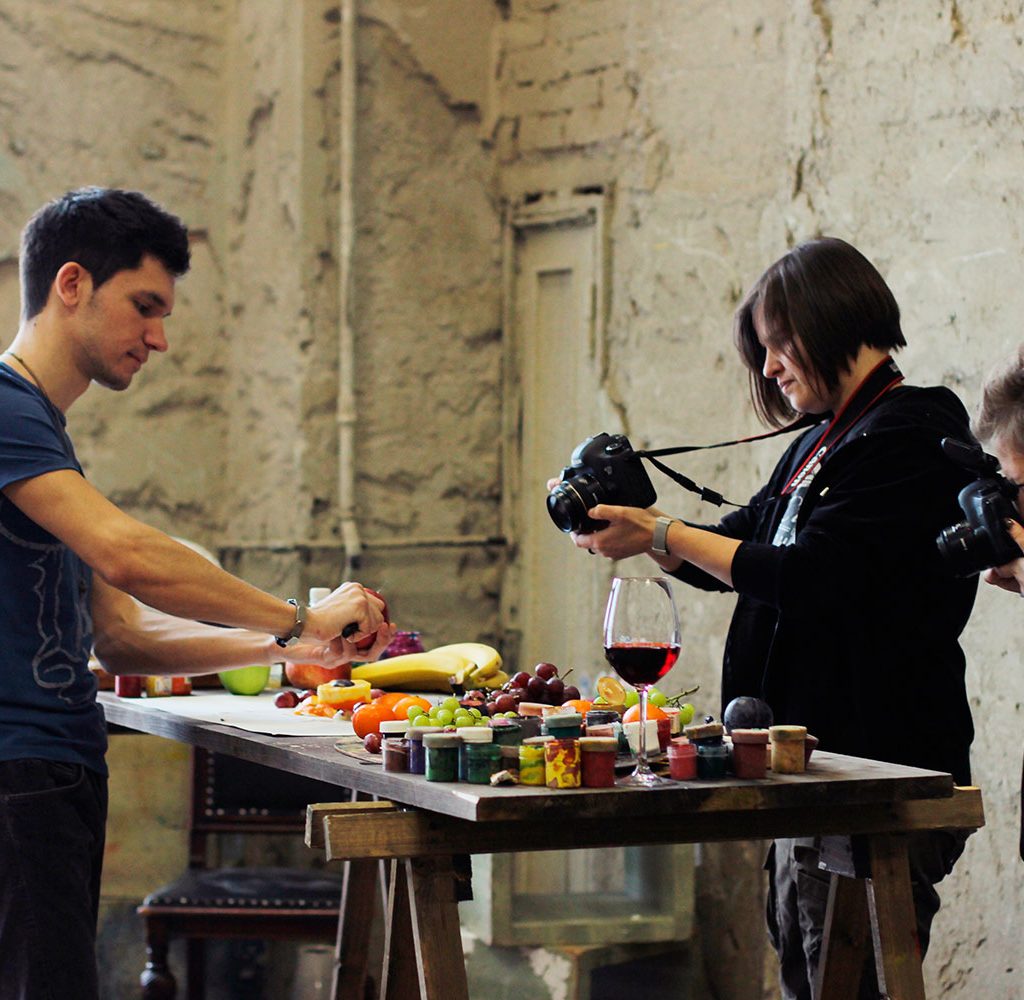 Vika Tsyganova is, of course, “Russian vodka, black bread, herring”, Sergei Trofimov – “shashlik for cognac, very tasty”, the leader of the ChayF group Vladimir Shakhrin – “a bottle of kefir, half a baton”, and Zemfira – oranges. Probably, everyone who dares to draw some analogies will think so. However, for Paul, such associations are too superficial and straightforward. The main thing for him is to reflect the character traits.
Looking at the artist’s works, we immediately ask ourselves: why almost all of his heroes live far abroad? There are those who are closer!
“And let’s name the names of Russian artists, and you – say, from what would they be drawn?” – we suggest. Pavel laughs but agrees. And, of course, candidate number one is the idol of women, Stas Mikhailov! 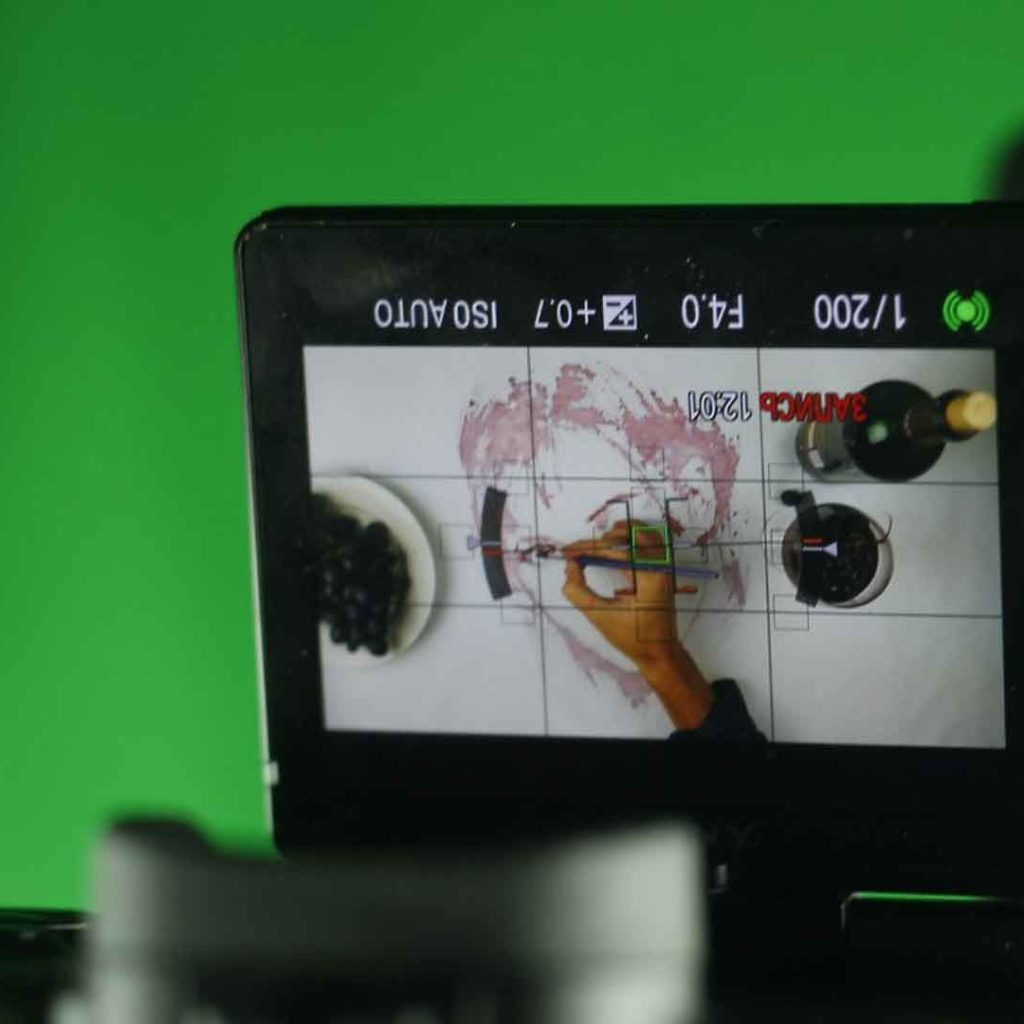 “Well, look. Stas … – the artist thinks for a moment. – I got the idea that if I painted him, I would do it with cognac and chocolate. Moreover, chocolate – black and black. Why? Well, first of all, he’s a chanson singer. There is some kind of strength and masculinity in him. And at the same time, he is all so sweet and glamorous. Yes, it is cognac, chocolate and nothing else. ”
“Oleg Gazmanov? – continues Pavel. – It seems to me that you can’t do without cucumbers or parsley. Cucumbers can be finely chopped and laid out with their silhouette. Greens are cheerfulness, and Oleg is such a person that he will give odds to all young people. So it seems like he wakes up in the morning and shouts: “Get up! Time to drink smoothies and make salads! ”
Next in line is Pavel’s favorite singer, Glucose. “Oh, it’s hard for me to say,” he says, “but this is something very sweet and very light. And definitely not sugar, because it is heavy. Maybe powdered sugar? Or transparent gummies? Definitely in her portrait there must be some kind of low alcohol. As an option – colored liqueur, because she is a cheerful girl, reckless, relaxed and romantic at the same time. ”
“You can also add coconut flakes,” the young man continues. “It seems to me it will be beautiful.”
So, it’s clear about the girls. Better about brutal men. Whom to suggest? Maybe Sergey Shnurov? For some reason, his famous phrase immediately comes to mind: “Someone bakes buns, and someone fries grasshoppers. This is his business. Not mine. He doesn’t shove them into my mouth, snatching my favorite whipped cream bun out of my hands! ”
“Cord? There must be something enchanting, – laughs Pavel. – You will be surprised, but I immediately saw fish with bones and beer. And there must be a lot of spices in the picture. Sharp, bright, scorching. ” 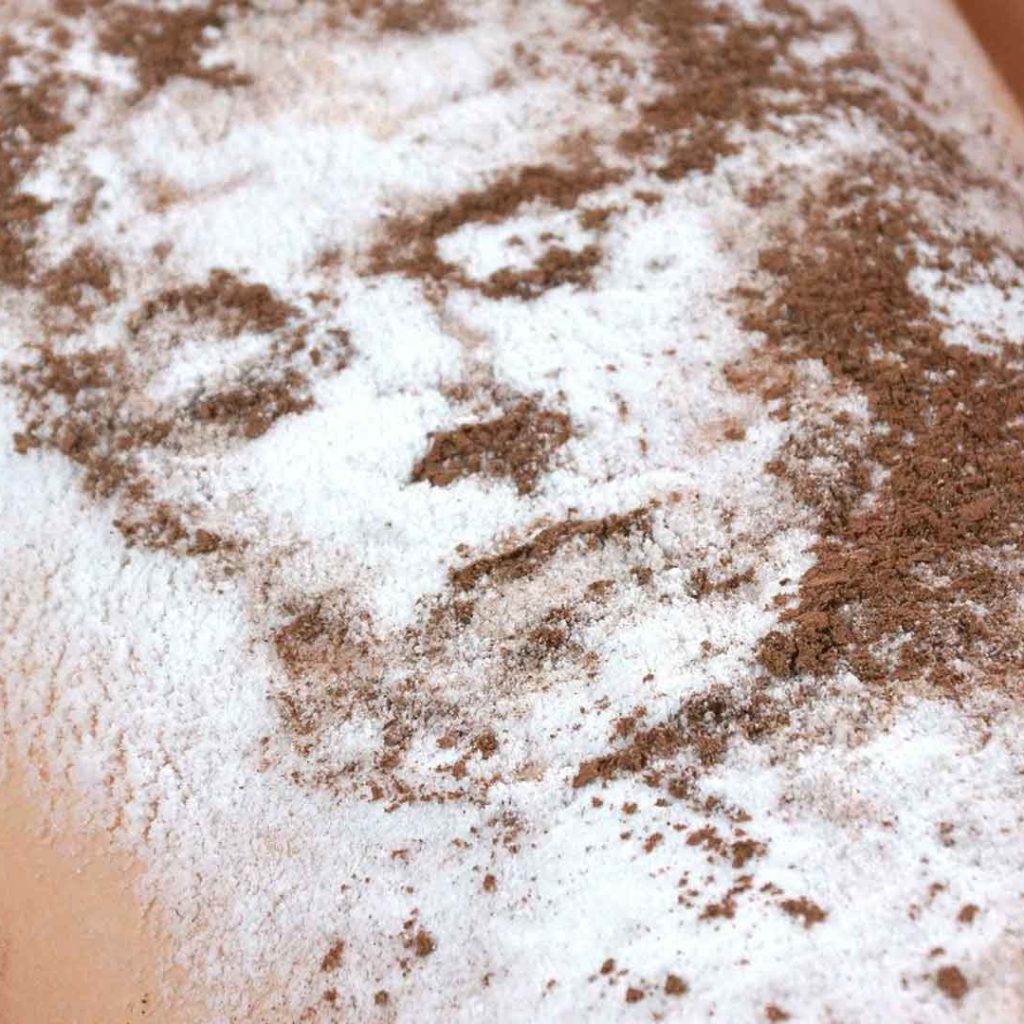 When asked where he got such associations, the artist replies that there are always some provocative moments in the work of the Leningrad group. You seem to listen – and you feel so good, so much fun. And then – again! – and seems to press down. He is straightforward, this Cord, honest. Not afraid to speak the truth.

“Good. And Dzhigurda? ” We ask. And here the artist admits that he has a dissonance.

“Nikita Dzhigurda … – he thinks. – What can he associate with? It looks more like a ketchup-type paste. Only it is not sharp, but some kind of unexpected. Unrecognizable by the taste buds. He’s just an unpredictable person. Outwardly – very courageous, defending his position, but inside – subtle and able to speak in poetry. And, of course, some kind of alcohol can be added to the picture. It won’t be so good without him. ” 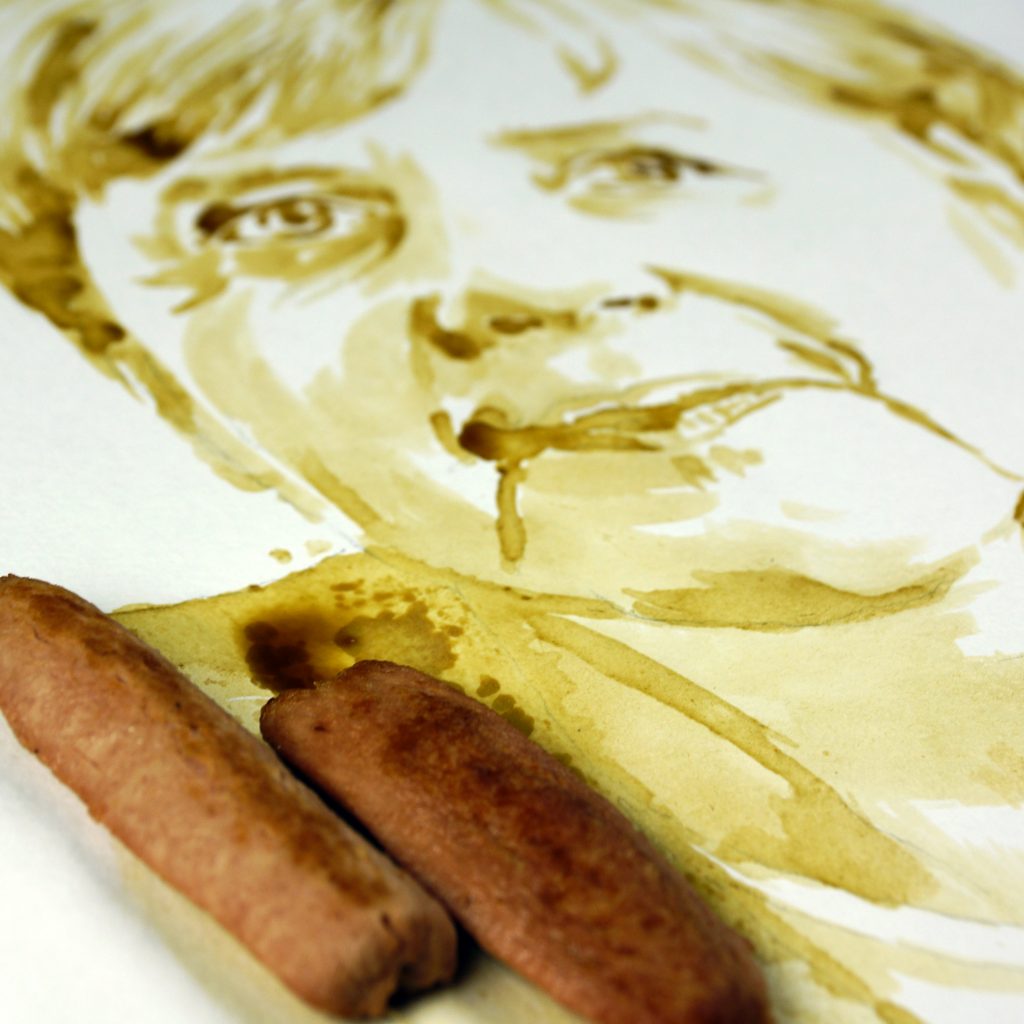 Gazmanov – cucumbers, Cord – no whipped cream, but beer and fish, Glucose – coconut flakes. Only Olga Buzova is unlucky, about whom the artist says that he would hardly undertake to draw her.

“She is pretty, hardworking, but as a person she does not appeal to me at all,” explains Pavel. – Listen to the songs, and there is the same thing! ”

“And yet … – he thinks. – Well, I would probably use vanilla and pepper. Vanilla – because her creativity is poppy and of the same type, and pepper – you know yourself. ”

However, Buzovoy, one might say, was still lucky: the pictures painted with pepper will be stored for a long time. Unlike, for example, the portrait of Angela Merkel, which Pavel created from sausages and beer. You cannot varnish this and you cannot hang it on the wall. In general, the artist is sure, beauty can be seen even in a jar of sprat – the main thing is to ignite!