Pavel Bondar performed Beyoncé with chocolate, and from bread and tea he created an image of the great impressionist Van Gogh

Paul’s colors are not only wine or coffee, more or less suitable for painting, but even such unexpected materials as spices, tea and even bread.

Meanwhile, Ukraine has returned the paintings of Aivazovsky and Shishkin to Crimea.
“This idea came unexpectedly for me – I didn’t suppose that it is possible to use not only artistic materials for drawing. But now I am convinced and, moreover, I think that you can draw with anything, the main thing is what the picture contains, namely the character. Food, in my opinion, just can show a little more – that which connects the person himself and the ingredient from which he was created in the picture, ”the artist told us.

Bread impressionist
The first portrait created by the artist in such an unusual manner was the image of the French singer Lara Fabian. To implement his idea, Pavel chose coffee. “Coffee is close to watercolors in its properties, and I wanted to learn how to write in this style. Lara Fabian is a woman for whom coffee is very suitable. Her hair, these curls, passing from light to dark curves, are as soft as steam rising from a cup, ”the portrait painter told us. 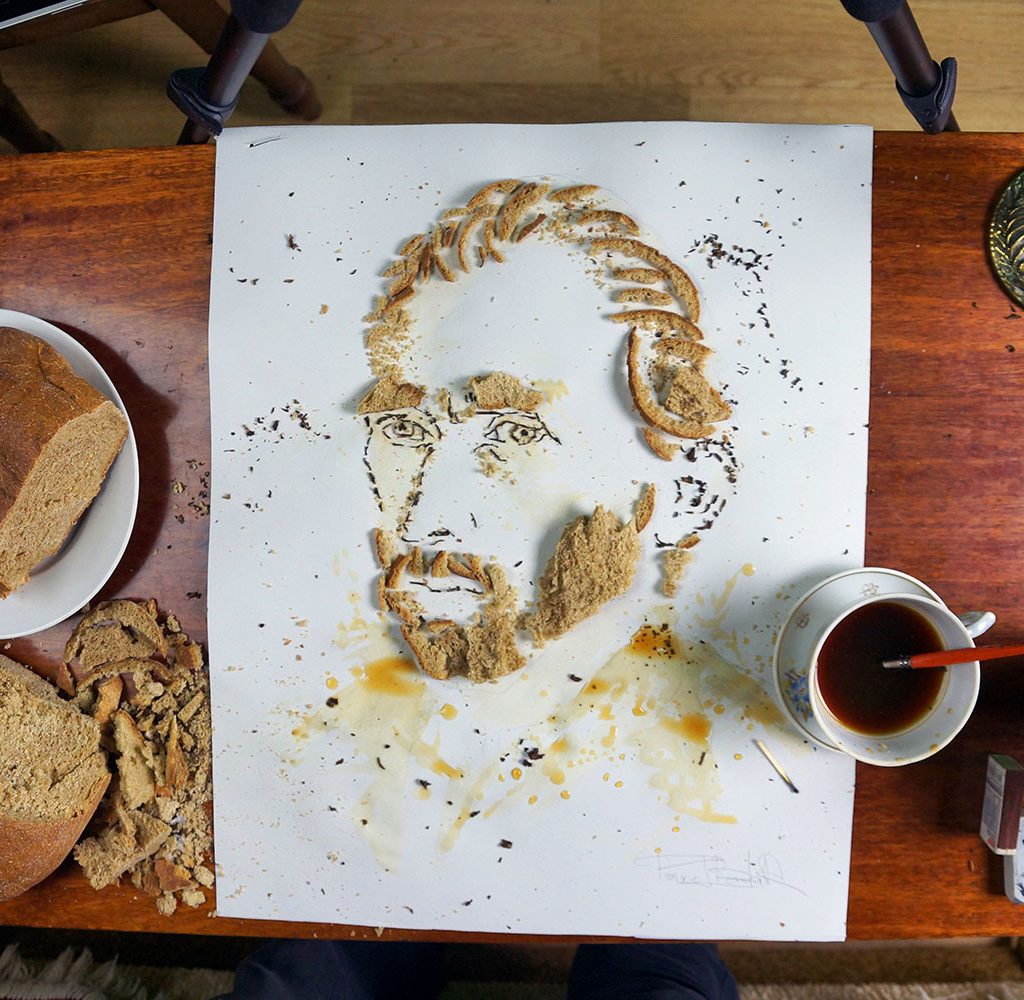 And already the next work of 25-year-old Pavel Bondar shocked the imagination – he painted a portrait of the Dutch impressionist painter Vincent Van Gogh using black bread and tea. This unusual material was dictated to the author by the most difficult life of Van Gogh. “Van Gogh spent many years in poverty, and despite the fact that he is known throughout the world, his diet often consisted only of bread and water. Since the twentieth century, many artists have painted the portrait of Vincent Van Gogh in various techniques. I also thought, why not make my own small contribution. Careless slices of bread fold into the correct facial features and give birth not just to a person, but a whole reflection of the life of that person, ”Pavel explained his plan.

One of the artist’s last works is the singer Lady Gaga. Photo: From the archive of Pavel Bondar

In the future, Pavel continued to develop experiments with various products, adding red wine and grapes to his creative arsenal, as, for example, in the case of creating a portrait of the infinitely feminine French singer Mylene Farmer, or chocolate when painting the image of the American pop diva Beyoncé. And while working on the portrait of the Chinese actress Zhang Ziyi, the star of the famous film “Memoirs of a Geisha,” the artist has already used a whole dish – sushi. Using soy sauce, he first sketched the facial features of a beautiful Chinese woman, and then added volume to the image using nori (edible seaweed), red caviar, rice, ginger and even wasabi (“Japanese horseradish”). 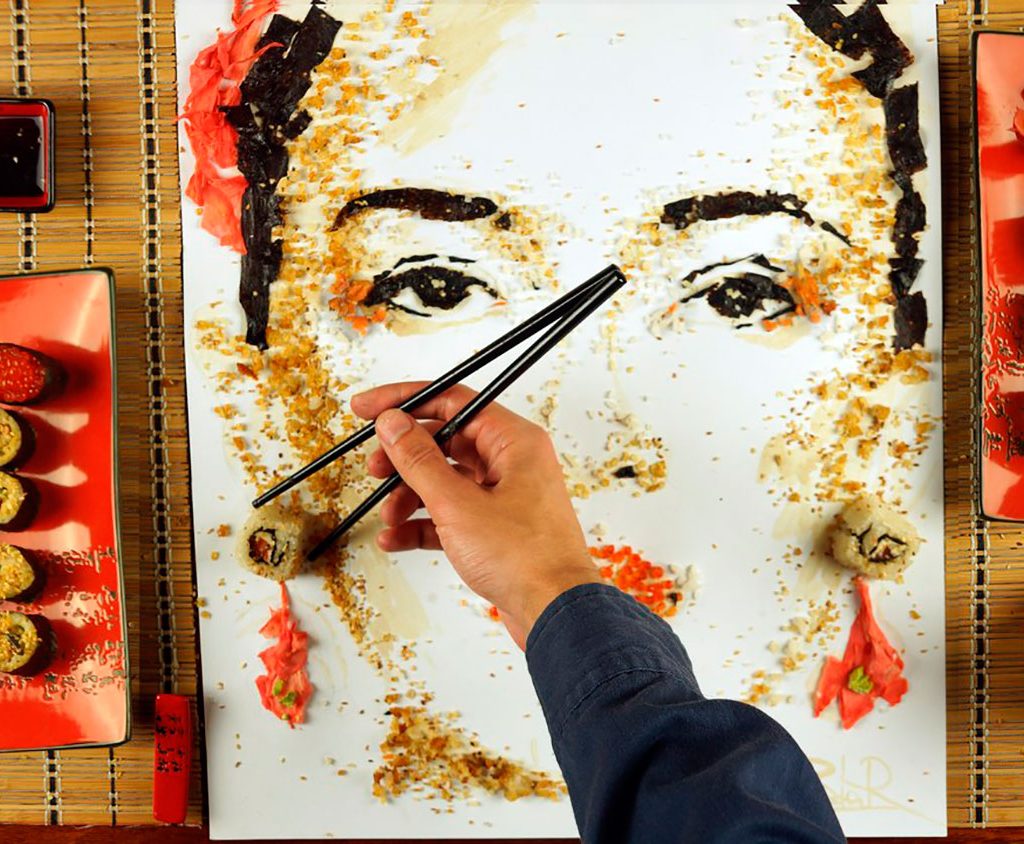 From sushi, Pavel painted a portrait of the star of the film “Memoirs of a Geisha”

“While trying this or that product, I discover in myself what I did not know before, some new techniques, methods. I prefer not to share materials with each other. Mixed media is essential. And I am also impressed by the fact that the portraits are very different in their execution, and in order to draw, you need to feel each ingredient, understand its properties, pass through yourself how it will look, how close it will come to the character in the picture, “Pavel shared with us. Bondar. 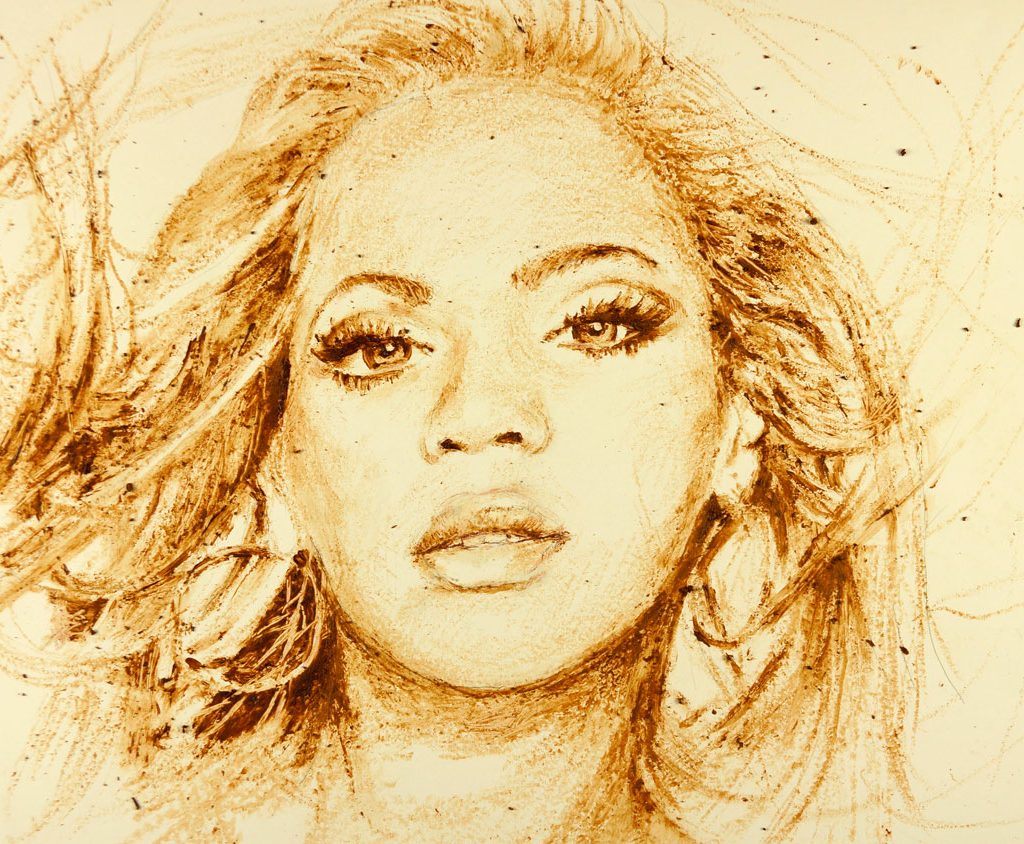 The artist painted the gorgeous Beyoncé with chocolate.

For several years Pavel has been successfully conducting art master classes for those who want to learn how to draw and does not deny the possibility that in the future he will probably pass on to his students the wisdom of creating delicious portraits.